We plan your success

Mexico collects the highest foreign investment in the last 22 years 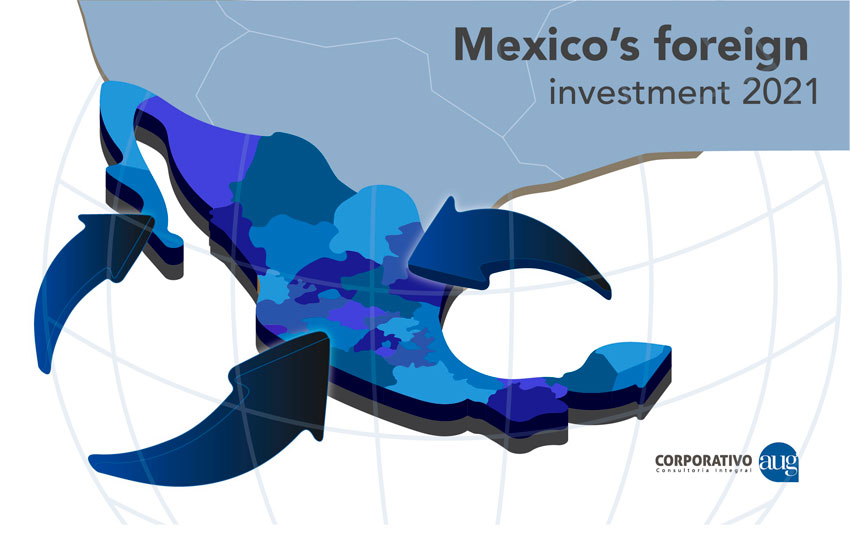 After a 2020 with many changes, since it was the year that affected the world economy due to the unexpected COVID-19 pandemic, leaving us immersed in an atmosphere of uncertainty; this year 2021 is positioned as the new awakening of the world economies.

And Mexico is no exception…As our country begins to make efforts to recover from the pandemic, the economy overall has been quite dynamic and favorable.

Recently, in the first quarter of 2021, 11,864 million dollars were collected in Direct Foreign Investment, 14.8% more than the same period last year, according to preliminary data published last Thursday, May 20th, by the Mexican Government.

“This amount is the biggest collected for a first quarter since 1999”, reported Mexico’s Secretariat of Economy.

According to the classification by type of investment, i.e. the origin of the financing, 59.2% belongs to reinvestment of profits, 18.6% to new investments and 22.2% to intercompany transactions.

Considering the classification by country of origin, the United States is still the largest investor in Mexico with 42.5%, followed by Spain with 12.1%, Luxembourg with 8.2%, then the United Kingdom with 5.5%, least but not last, Canada with 4.8% and finally other countries with the remaining 26.9%.

In other words, Foreign Direct Investment in Mexico during the first quarter of 2021, came from 1,872 partnerships with foreign capital participation, 833 trust fund contracts and nine foreign companies.

The amounts reported before, only consider investments made and formally notified to the National Registry of Foreign Investments of the Ministry of Economy (Secretaría de Economía, SE for its acronym in Spanish). Therefore, they are preliminary and may be updated in successive quarters.

In addition, several foreign companies currently operating in the country have expressed their genuine interest to continue investing in Mexico; such is the case of the company Mercado Libre, which is currently ranked at the top of the lists of e-commerce providers; which said in early April that it will invest US$1.1 billion to expand its storage space and services in Mexico this year, driven by a boom in online shopping during the pandemic.

The number is nearly triple the $420 million MercadoLibre spent last year in Mexico.

Last April 29, the transnational automotive giant, General Motors, also announced its investment of more than one billion dollars in the Ramos Arizpe, Coahuila, manufacturing complex to open a new paint plant with innovative technology, which will begin operations in June 2021.

Finally, part of this initial investment is expected to prepare the complex to expand the automotive assembly plants and global propulsion systems to transform the Ramos Arizpe Complex into General Motors North America’s fifth manufacturing site for the production of electric vehicles.

We help you plan your success

We are pleased to serve you

Suscribe to our newsletter